holaaaa.
I haven't been using my LJ in so long and I miss it, so I'm back and would love some new LJ friends since I think my old ones forgot about me and probably thought I died haha.
Anyways, my name is Lexus. Yes, like the car. I'm eighteen until July 10th.

interest:if you have similar interest, please comment here i'll add you back!

Hello! My name's Dewayne, I'm a Cancer/Gemini cusp born in the year of the Dragon. (That makes me 23 ;D)

I have a tendency to rant and don't expect everybody to read everyone of them, though I do appreciate those that do. I appreciate those that have something to comment even more. I do my best to comment on other peoples entries as well, though I'm not one to comment just for the sake of commenting. I just made this journal today and would love to have some friends to talk to. If you're interested I just ask that you post on my journal and let me know; though feel free to add me as soon as you do.

Like I said, I'm 23. Currently unemployed and not yet going to school. Though I hope to start as soon as possible for a Major in Botany with a Minor in Horticulture. My goal is to eventually own a holistic garden though I hope to get a job at a Botanical garden for my income so that I can offer what I grow at the bare minimal price. I've watched family members torture themselves with the side effects of medication and it's really inspired me to try to give people an alternative when appropriate.

Loosely related to that subject, while currently two years clean, I am a activist for the legalization of Marijuana. I say this because it's something that means a lot to me and it's only fair to give a heads up to any potential friends. This is a subject that will on occasion have a spotlight within my journal, though I respect anyone who has a different opinion... as long as they can respect the same.

I'm a big fan of video games, currently I'm obsessing over Left4Dead 2 (as some of you may have noticed from my icon). I play all kinds of video games though, even if it is a hobby that occasionally gets abandoned. Some of my favorites; Shadow of the Colossus, Guilty Gear, Katamari Damacy, Dragon Age, Resistance, Journey, DDR, Rockband, DC Universe Online, FFXI, and the Scott Pilgrim vs. the World game.

I'm also a bit of a music fanatic, I'll listen to -anything- as long as it's not screaming. I tend to listen to more rap than anything though, mainly because rap is a hobby of mine. Though my ipod's full of a lot of random music. Some of my favorite groups; Tech N9ne, Awolnation, Bruno Mars, Red Hot Chili Peppers, Sketchy Waze, Maroon 5, Matchbox 20, Stroke 9.

I don't often watch TV, but when I do it's usually cartoons. I also like Anime though I've just recently started watching them again.

I also dedicate a good portion of my life to self improvement and seeking enlightenment. I'm a spiritual person. Spiritual, not religious. Though I was raised Baptist I've incorporated several beliefs into my faith. Shamanism, Buddhism, and Taoism being the most prominent. Parts of my journal will reflect my development as well as journeys in lucid dreaming.

Though my friends mean the world to me and a good deal of it could also involve them and our weekly Dungeons and Dragons game.

I look forward to meeting anyone who wants to be friends!

Also, this is me; 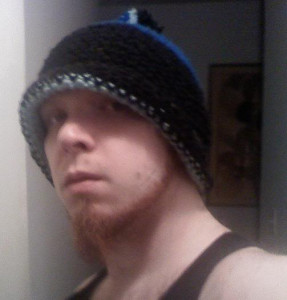 Hey dudes. I'm Katie.
- 24, Canadian.
- I live with Koreans, cats, and hippies.
- I'm a psych student, finishing up my degree so my boyfriend and I can move to Halifax.
- I'm open-minded.
- I get lazy with capitalization in my journal but I do know how to write. I think of it more as creative freedom. If that's something that bothers you, do pass me by. I don't like Grammar Nazis.
- I'm into martial arts and water sports.
- I spent most of my teenage years in the LGBT community.
- I'm generally an optimistic person, but I do have off days.
- I write a lot about school (even now.. I'm in summer school).
- I'm fairly androgynous. Make-up and skirts make my skin crawl.
- I've been on LJ for 12 years. If you're looking for pals who won't fall off the face of the earth after a couple months, you've found one.
- I do survey memes when I can't sleep. Doesn't happen too frequently though.
- I'm pretty chill when it comes to commenting. I'll comment when I have something to say. I expect about the same of my LJ buddies. It is nice to communicate sometimes anyway.

Lookin' for:
- People who write about their daily lives (not necessarily on a daily basis). I really like getting to know folks as individuals. I'm a fan of the human mind. You're all so much more interesting than your memes and fandoms! (which are okay to read about now and again.. it's the exclusivity that makes them boring.)
- Folks who try to be optimistic.
- Maybe some students.