My journal is very empty at the moment, as it's brand new. Needless to say, I'm a long-time lj user and I'm coming back after a hiatus of a few years. I tend to update from once every 1-2 weeks up to two to three times a week. It can be a little bit sporadic, but I consider myself "moderately active". I read my f-list far more often than I actually post, so you can still expect interaction from me, even if my journal itself is getting crusty around the edges.

I plan on writing about: book reviews, game reviews, movie reviews, cooking and subsequently trying not to set fire to the kitchen, study (computer systems, for the nerdily-inclined), alt. fashions and how I'm a broke student who can't afford them, self-improvement and other real-lifey things. My journal is flagged as containing adult content, so please keep this in mind if you're under eighteen - you won't be able to see my journal entries.

Things:
books:
The Legendsong Saga, Harry Potter, The Stand, The Husband, A Song Of Ice And Fire, The Obernewtyn Chronicles, Jack West Jr., With Lots Of Love From Georgia, Vicki's Habit, To Kill A Mockingbird, Brave New World, One Flew Over The Cuckoo's Nest, The Dark Wife.

Hey:)
Anna. 25. Happiest person in the world at the moment. Currently live in Moscow, Russia. I am both American and Russian. Speak 4 languages: English, Russian and German are ok with me. Spanish is ok too if I have a dictionary somewhere near. I've been using LJ for a year (more than a year actually but really posting and reading for a year umm may be two hahah) and found some amazing people. I always read and comment. If I don't read or comment then I am not interested in you and eventually will remove you from my fl or I'm busy in real life.

I am trying to find friends.
I don't really care what music you listen to or books you read. I mostly look for a good person to talk to and read and actually be able to support when she/he needs it. That's kind of thing I am looking for myself. Umm well now I sound desperate and I am not. Urgh! I am terrible at introducing myself. So hey! :) 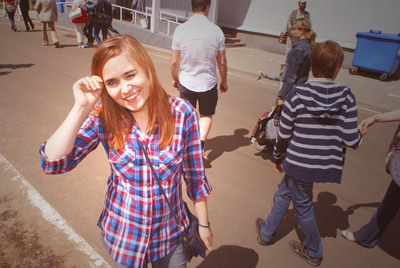